Our Founder and Director, Jeff Watters, has been a passionate petrol head since a young age. Recently, he has found a way to use this passion to raise awareness of Motor Neurone Disease (MND). 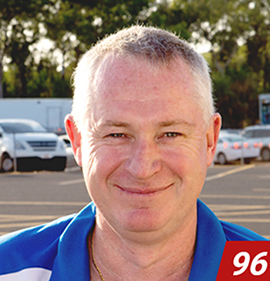 Jeff races competitively in the Aussie Racing Cars series, with Cure for MND Foundation signage to help raise awareness and funds for the charity. He has been racing Aussie Racing Cars since 2013, and has only been able to support MND with the help of his sponsors, including Hertz Australia, Pedders Suspension, Parkinson Group, Aughtersons Insurance Brokers, Corporate Finance & Leasing, Systema Group, Active Auto Electrics and Tungaloy Australia Pty Ltd.

Jeff’s racing involvement began in 1996, having raced in the Commodore Cup series and competing in both Bathurst 24 hour events in 2002/3. Jeff initially became involved with Cure MND through the families he met through Automobility and he has also had personal experiences with MND.

“There is no cure, and no effective treatment. MND sufferer’s bodies just start shutting down. I had met several Automobility clients with MND over the years but two family friends were also diagnosed and it was then that MND really got my attention – especially when my friend Bruce passed away” Jeff said.

Through Jeff’s work, Cure MND has become one of the official charities of the very popular and entertaining Aussie Racing Cars.

Jeff regularly takes Automobility families out on the track and behind the scenes to see the world of competitive racing at his events.

There is currently no cure for MND. If you would like further information on MND or would like to support the Cure for MND Foundation, you can visit their website: www.curemnd.org.au.