There are so many wheelchair users around the world proving that having a disability isn’t an obstacle to having a happy and successful life or career. Thanks to social media and increased news coverage, there are more opportunities than ever for people to share their individual experiences and how they have overcome challenges in their life.

In this month’s blog we recognise and celebrate some of these achievements!

Here is a list of just some of our favourite Aussie wheelchair users who are encouraging everyone to live their best life and reach for their goals:

Nazim Erdem OAM became a quadriplegic at the age of 20, after diving off a pier into shallow water while trying to impress some girls. While adjusting to life in a wheelchair was difficult, it never changed his love for playing sports, nor his desire for adventure. Erdem began playing wheelchair rugby and is now a five-time Paralympian! He was the oldest and most experienced player for our Australian Wheelchair Rugby team, The Steelers, before retiring in 2017 after playing 312 games. He was also the first person with a spinal cord injury to paraglide solo and compete in the Targa Tasmania car rally – a six day car race across the state. Not to mention he is onWhat a star!

Dylan Alcott OAM was born with a tumour wrapped around his spine and following a surgical procedure to remove it, become a paraplegic at the age of 10. Today, at the age of 28, he is a basketball and tennis Paralympic gold medallist who regularly works as a host on radio broadcaster Triple J. Most recently, we saw Dylan win in the Australian Open quad wheelchair singles final for the fifth time in a row! The match against American wheelchair tennis player David Wagner was broadcast to thousands of home across Australia. This meant the world to Dylan who is an advocate for people with disabilities encouraging them to chase their dreams through his charitable organisation – The Dylan Alcott Foundation.

Timothy Lachlan has hypermobility and low muscle tone from the waist down, a condition which makes him rely on a wheelchair to get around. Despite the challenges that come with his disability, Lachlan is dedicated to helping others. After seeing the lack of support his parents received with looking after his younger sister who has non-verbal autism, Lachlan decided to pursue Occupational Therapy at university. In his spare time, Lachlan takes part in the action sport Wheelchair Motocross (WCMX). Not only was he the first Australian WCMX competitor but he was the first Australian in history to land a wheelchair backflip! While practicing the extreme sport, Lachlan has mastered getting up and down curbs, stairs and steep ramps – skills he teaches in workshops around Australia to help other wheelchair users. 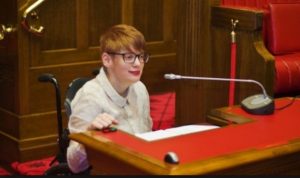 Playwright, Actor & the youngest woman to be elected in Australian Pariliament, Kelly Vincent.

Kelly Vincent has spastic cerebral palsy that affects both her legs and left arm, but she has never let her disability stop her from pursuing what she is most passionate about. At university she completed language studies and became fluent in French and Spanish. She also wrote and appeared in several ‘No Strings Attached,’ productions – a theatre production company which presents the unique perspectives of artists and performers who live with disabilities. Kurt Fearnley AO was born with a congenital disorder called sacral agenesis which means he is missing certain parts of his lower spine and all of his sacrum. Despite doctors thinking that he wouldn’t live longer than a week, Fearnley is now a three-time Paralympic gold medallist and two-time Commonwealth Games gold medallist. He has won over 30 marathons, including New York, Chicago and London in a career spanning more than 20 years!

On top of his incredible career as an athlete, in 2009, Fearnley crawled the treacherous, 96-kilometre Kokoda track in Papua New Guinea to raise awareness of men’s health. In 2012, he was also a member of the winning Sydney to Hobart yacht crew, Investec Loyal! Robyn Lambird has cerebral palsy which makes the muscles in her legs tight and resistant to movement. The 21-year-old is an athlete competing in wheelchair racing, and is also a blogger and fashion lover.

In 2016 she was the first adult with a visible disability to feature in an active wear ad for Target – a campaign designed to promote inclusion. She’s also part of the organisation Starting with Julius which aims to promote the inclusion of people with disabilities in the mainstream media.

Lambird is passionate about advocating for representation of disabled minorities, and continues to raise awareness through her Youtube channel and personal blog.

At Automobility we are dedicated to enabling people along life’s journey! We design Wheelchair Accessible vehicles to meet the specific needs of each individual. Call us on 1300 660 773 or contact us online to find out more!